I used to blog on another platform. Check out what I shared in earlier years here.

We made potato people for our class movie and my potato is a boy. I was thinking of calling him Hayden Wilde, my favourite athlete that was playing in the triathlon in Olympic and Commonwealth games. My teacher: Mrs Agnew gave us a surprise in a box; it was covered so we couldn’t look inside. The secret surprise was actually wrinkly, ugly potatoes. Most people thought that they were disgusting  but really I liked the weird potatoes all squashed inside the box.

I made my potato person with these pipe wires that were all different colours of the rainbow. I used another pipe wire so it could be a kind of attachment for a kebab stick as a lance. I also used the sticks and little black pompoms for eyes. There was a lot to add but unfortunately my potato got wrecked so I had to restart.

When we practiced how to make movies for our class, we had to use ipads because they allow us to make stop motion movies. There are four jobs for people; Director, Camera person, scene manager and editor. We all had turns at each role and we were in groups of maybe 3 or 4 people. It was fun learning all the different jobs needed to make a movie.

The  background scenery for our movie are: the Evil layer, Rocket, Inside the castle and the party scene. It took a lot  of painting, using material (like cardboard, paper, cello tape, paper rolls  and corrugated  paper) and also doing voice overs.

It started when the princess was going to be the queen and they also celebrated a party, but the UFO comes in!

It invades the party and steals the crown and the princess. The king gets the rocket and sends the royal

monsters. The princess tries to get the crown but the boss of the monsters swayed it away and since she was going to be queen, the crown slowly moves, like telekinesis (but the princess was not moving it!) When it is near the princess, it swings like a magnet and lands on the newly elected queen. The new queen tells the royal guards that she’s got the crown and so they start to retreat. When they are back in the castle everyone is there and the new queen, old queen and the king went to go back on their thrones.

This is me starting to make my 1st potato: 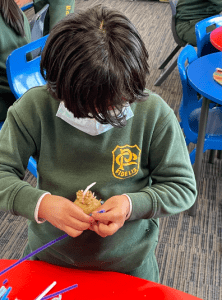 4 thoughts on “Making our class movie”

About Me | Ko Wai Ahau

Add the link to the About Me blog post here.

Keep connected with this blog